As I cycle around it seems that the risible cycling facilities and ever-marginalised pavements have a special purpose for builders. Take the following... 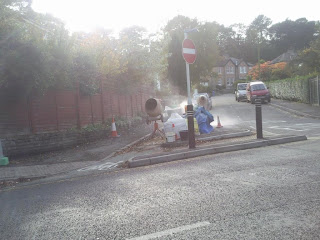 Here we see S&L Construction of Poole using a cycle lane as a temporary workshop for cutting bricks. This pic was taken on a Wednesday. I first saw the pallets of bricks and sand on the Monday morning so they would have blocked this for at least 5 days. Here's the lane from the other side on Google Street View... Gordon Rd cycle entry
This lane allows bikes to cut up through Gordon Rd keeping them away from busy rat-runs. Blocking the lane like this prevents cyclists from legally using Gordon Rd. I did report the matter to the Police on the Monday morning stressing the extent of the problem but as you can see they didn't think it was worth doing anything about.
The next 2 pics show the road outside a Tayfield Homes construction project that has been running for months just NW of the Wessex Way underpass on Wellington Rd. The workers on the site use the cycle lanes and pavements for parking all day on a daily basis. The bottom picture shows the other side of the road. There is plenty of daytime parking available in nearby roads. Parking is prohibited on these stretches during the day. 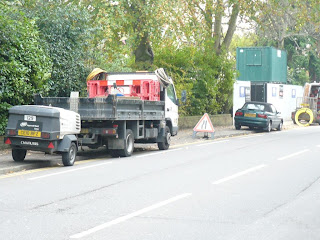 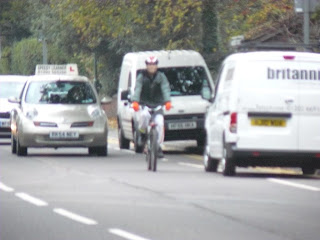 This is the back of a council vehicle parked in Exeter Crescent. This stretch of road is part of the cycle route between the Square and the beach. They have decided to stop opposite some parked vans and made it very difficult to cycle past them. They were having lunch. 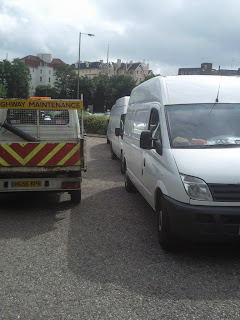 The problem isn't confined to vehicles. Many times signs are put on cycle ways as the example below illustrates. The cycle lane is completely blocked and forces cyclists onto the pedestrian 'side' just next to a nursery school. The sign is kind enough to tell us that it's going to be there for several months. 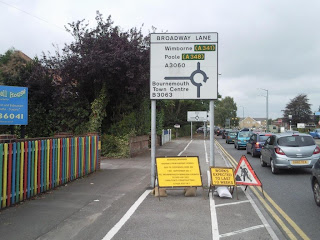 Now on to Motorbitz in Winton. Not content with telling their customers to hop onto the pavement outside while they carry out oil checks, wiper replacements etc, they use the space for loading their van even though they have a perfectly serviceable loading area at the rear of the shop. Combine this with their signs, it has to be a record for %age pavement reduction. 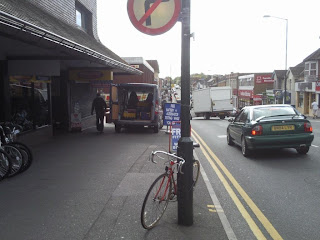 A little further up the road, Roadways Container Logistics show how bad they can be at logic. 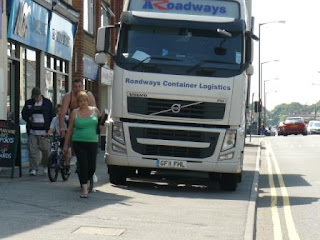 ...and finally... another Council Van (number 029 pic taken on 16 Nov) in front  of STB Electricals. Mind you, ALL their customers seem to park here so who cares, eh? 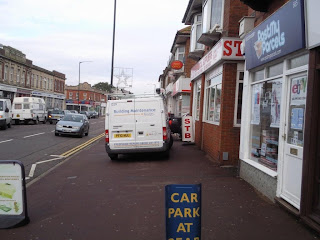